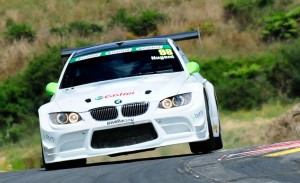 This round was part of the Toyota Racing Series meeting with all the young international drivers here including Nelson Piquet’s son Pedro.
The Buro BMW GT2 car qualified well, at the front of the field with a 1.08.1 – only 1 tenth outside of our “breakout “ time. The breakout time is designed to stop cheque book racing and one car being so far ahead of the field that no one else has a chance. It is a system that eliminates the need for a huge rule book.
Kent Baigent was there for the first time with his new professionally German built E92 M3 racecar. It has every possible trick and piece of technology including driver adjustable rear wing, complete flat under tray and many more. Kent is a very experienced endurance racer. He was next to me on pole and got a slight jump on the start so I had to work hard to stay inside him at turn 2 and take the position back over turn 3. There was a lot going on behind me with Rob Berggren, Andre Mortimer, Warwick Mortimer and Kent all vying for position. We managed to hold them all out and take the win, banking some more valuable championship points.
The second race, as usual, was a reverse grid, and I had to start last from pit lane, 10 secs behind the car ahead of me being Rob Berggren. We start from pit lane because the slower cars have already done one lap before we start so it would be unsafe to start on the grid. It was a great chase, passing the field to finish second behind Rob – the 10 sec gap was too much to close. As it was, I broke out on one lap trying to catch him with a 1.07.9, so earned a 25 point penalty for going too fast.
As we lined up for the last race it started to rain, but not enough to put wet tyres on, so it was a very slippery race, on slicks in the wet. Again Kent got a jump on me on the start but this time a bigger one, and once again I had to work hard to take him at the turn 2/3 complex. He left me room so it was a tidy pass. Rob Berggren was hunting me down gaining a little each lap, as he was running a softer tyre compound and able to get more heat into his tyres in the damp conditions. I was in no rush to risk an off and held him out to take the win. It was a challenging race but the car was nicely balanced and we didn’t have to take many risks.
All in all, another successful weekend for the Buro BMW GT2.