Championship over – and won!!! 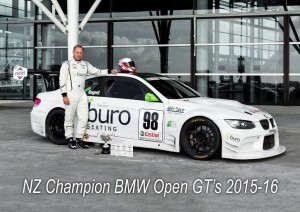 The last round of the championship was held at Hampton Downs on April 16th and 17th.

All we had to do was finish in a reasonable place in the  3 races at this final round. Won the first one, but as I went out on the warmup lap for the second race the prop shaft broke at the cross behind the gearbox and smashed its way into the cabin so we were a DNF for that race which was the last race of the day, and with a lot of damage. Glad it happened at 70km/h not 250km/h as I don’t think I would have a leg left if it broke at that speed – as it was the seat mount protected me. Our last race was the following morning at 8.30am and if I didn’t start I would lose the championship. We worked on it overnight and got it back on its wheels 10mins before the race so crossed our fingers and went for it. The car was vibrating and rumbling badly but held together for the race and I took a second place, and so clinched the championship.

So it all came down to the final race of the final round of the championship. Special thanks to Neil Allport who used up many of the night and early morning hours to rebuild the driveshaft.